You are here: Home / Sew-cializing / An LA Sewists Meetup & some Hollywood Costumes

Ah, it’s been two weeks down since our weekend

down in Los Angeles and I am just now posting about it!

Most of the reason is due to the fact that I did not take any photos!  My bad!  So I waited until others posted their photos so that I could snatch them! 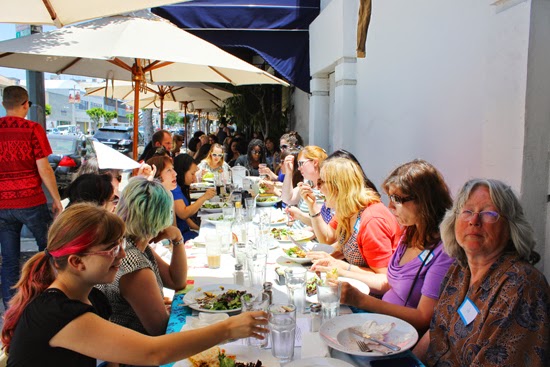 We met at an outdoor cafe next to The Fabric Store.  There were about 40 of us there so I did not have the opportunity to meet everyone.  I am also a bit of an introvert as I suspect others are as well with sewing being largely a solitary pursuit.  Mr. H came for lunch and then promptly left to scour some nearby record stores. 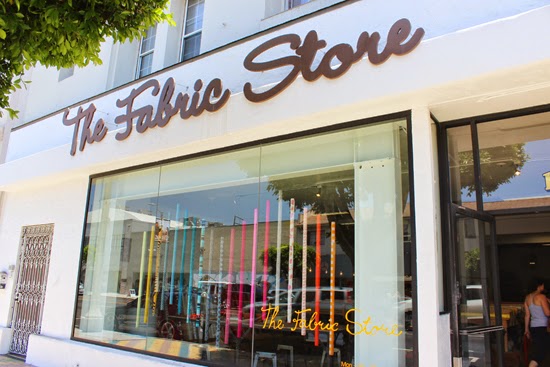 We had a pattern and fabric swap and everyone swooped in to get their hands on the goodies we all brought.  I snatched this ivory lace (appears to be cotton) and this Simplicity Retro pattern that I don’t have.  I was trying not to be a hoarder and to only grab patterns that were either in (or around) my size or something I needed.  I did see a couple of patterns I would have liked on the other side of the table, but I wasn’t quick enough to grab them!

I also won the Jedediah pants pattern provided by Thread Theory in the giveaway!

Look at the goodies we got, too! Isn’t that button awesome?!

I’m not an LA Sewist as I live about 5 hours away. I’m a NorCal Sewist or a Sierra Sewist.  Someone asked if we had a meetup in my neck of the woods where we would shop. Well…. your choices:  Joann’s (30 miles west), Beverly’s (70 miles northwest) and Hancock’s (70 miles southwest).  I don’t think a chain store is anyone’s idea of a great place to meet up!!! 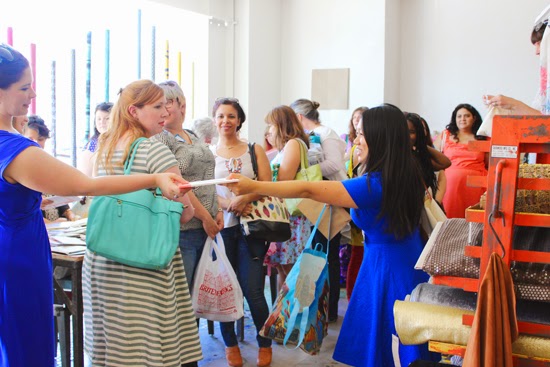 This was my first sewing meet up and it sure was fun!  I know there’s a group that meets up in SF at that would be fun to join sometime.  Britex is always a good place to go!  It would also be cool to set a NorCal one up in Santa Cruz and hang out at Hart’s.  Santa Cruz is smaller and more accessible than LA or SF, plus in the middle of the state.  Not sure how many sewists we have in Northern/Central California, but there certainly must be enough to rally around a meetup.  When I’m out shopping in central Cal it often feels like my MIL and I are the only garment sewers.  Everyone else seems to be buying fleece (WTF do they do with all of that?), quilting fabrics and the occasional prom/wedding fabric shopping.  It’s rare for me notice anyone wearing, much less buying, me-made garments and fabrics in my area.  It’s different when I’m at Britex or Stone Mountain & Daughter (Berkeley).

I also got to meet and shop with Melissa!  How awesome is that?!  It was so cool to meet and hang out with everyone down there.  I think it’s pretty cool that Laurie, Erin and Kathy are exactly the same IRL as they are on their blogs.  Everyone was super nice whom I met.  Just wish I could have met and talked with everyone.  Maybe next time? 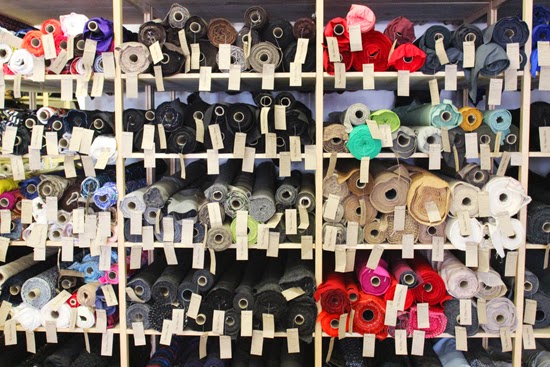 Also, this was my first time at The Fabric Store.  I had read some online reviews of it before the meet up and people were saying how it was like Britex.  Well…. it’s not really like Britex as Britex is far more expensive and has more fabrics as well as some very high quality fabrics (four floors of them!).  However. if you were to compare the quality of the same fabric at;l TFS as compared to Britex, it is similar, although TFS is cheaper.  For instance, the silk/cotton fabric I purchased at $14/yd would probably be $25-$30/yd at Britex.

I came armed with a list of fabrics, colors and yardage amounts and was not planning to stray.  As TFS hails from AU/NZ, I was hoping to score some wool for cardigans.  They had so much wool jersey in all different colors, but of course I had pale yellow and kelly green on my list and they didn’t have either….. so I was good and did not stray off my list.  However, I spotted this scattered polka dot silk/cotton upon arrival and it sat on my mind throughout my fabric perusing, so I got four yards of it, even though it was not on my list. 🙂  I didn’t do any other fabric shopping this trip, but plan to in the fall when we go down south for a longer trip.

And yes…. that is a new dress and I will take some photos of it this week and share the specifics with you. 🙂

After a fun-filled fabric day, Mr. H and I did some touristy things,

a highlight of which was going on the Warner Bros studio tour.

The studio tour itself was pretty cool even though our tour guide was not very knowledgeable about films/shows other than The Big Bang Theory, Pretty Little Liars and Gilmore Girls…. all of which I am not a fan of.  The WB movie memorabilia museum, however, was worth the price of admission.  They are celebrating the 75th anniversary of Batman, so they had a lot of movie props out which was exciting.  Mr. H (who has gone on this tour before) says that there were more props/costumes from various other films before the Batman exhibit, which may have been more interesting, but it was pretty cool seeing all of the Batman costumes, especially for someone like myself who is into costuming and fashion.

I just loved the draping on this dress.

Michelle Pfeiffer’s Catwoman costume was also pretty cool.  It was encased in a glass box, so not easy to take photos of.

I find the 89/90’s Batman costumes to be more interesting than the Christian Bale Batman.

My favorite part though, was the Harry Potter exhibit!!!!

Greeted by a Gringott’s goblin on the way in

I got to wear the Sorting Hat, although Mr. H missed taking the photo when I was sitting on the stool…. I got GRYFFINDOR!  I actually figured I’d be a Ravenclaw, but I guess the Sorting Hat sees what it sees!

I seem very nonplussed by the Dementor behind me

All in all it was a pretty fab weekend.  Looking forward to visiting the Warner Bros Studio in Leavesdon for the ultimate Harry Potter experience!!!!!! 🙂

I hope you enjoyed!