Nothing says summer to me like a peasant dress!

I have a few peasant dress patterns on my list and this is the easiest one of the three, so I opted to make it first.  To me, this one is reminiscent of the 1970’s with the ruffles and the bright orange color.  It evokes hot summer nights and county fairs and barbecues.

The pattern I used for this dress is the OOP McCalls 5864.  I was perusing vintage peasant dress patterns on etsy and the search came up with this one.  Not sure why the seller listed it as “vintage” as it’s only a few years old, but at least I found it!  The other two peasant dress patterns on my sewing list include a 1950’s one that I have to grade up quite a bit and a more complicated Vogue Anna Sui.  A quick and easy one seemed to be on the menu! 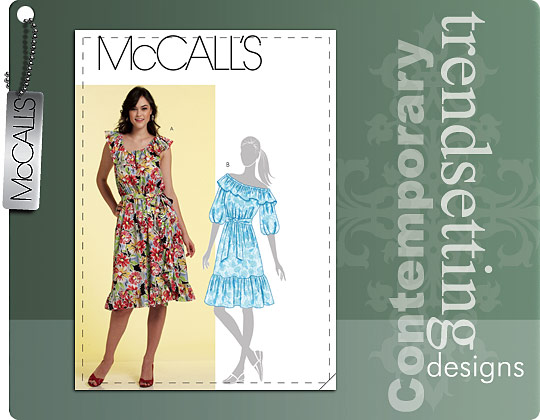 I used a coral J Crew silk/cotton voile from Fabric Mart that I purchased especially for this dress.  It takes a bit of yardage (although not as much as my other peasant dress patterns!), so I waited until I got the fabric on sale for $6.50/yd.  I also picked up the 5 1/2 yds I needed for the Anna Sui dress at the same time (a pale yellow floral).

I lined this dress on the bodice and the skirt with a white cotton batiste as the voile is sheer and I honestly don’t care to wear slips.  And …. I didn’t notice that my sash was not tied at my waist until after this photos….. isn’t that how it always goes???

I followed the directions which were pretty plain and simple.  This is a pullover dress with an elastic waist and a faux wrap on the side.  It’s fairly easy to construct, but takes a bit of time with all of the ruffles.

It fits fairly well, but as it’s not fitted it has a loose bodice.  The armholes are rather large and cause a bit of gaping.  I also see this in the dress the model wears on the pattern envelope, so I imagine that it’s the design.  If I were to make it again I would adjust that.  When I wore this dress to the LA Sewist Meetup I wore a camisole underneath as I was worried about it gaping too much, but I ditched the cami when I wore it out to dinner later that night and my bra wasn’t showing as I had feared.

I just love wearing this dress. It’s so breezy and summery and fares well in the heat.  It goes with boots and sandals and a dressy pair of espadrilles.  It’s exactly as I thought it would be when I envisioned it in my mind, which is always a good thing.  🙂