You are here: Home / Retro Garments / A Nautical Bronte + a Denim Peggy

I’m on board with a bit of nautical inspiration with this top and skirt!

This is the Bronte knit top by Jennifer Lauren Vintage and the Peggy skirt by BlueGingerDoll. 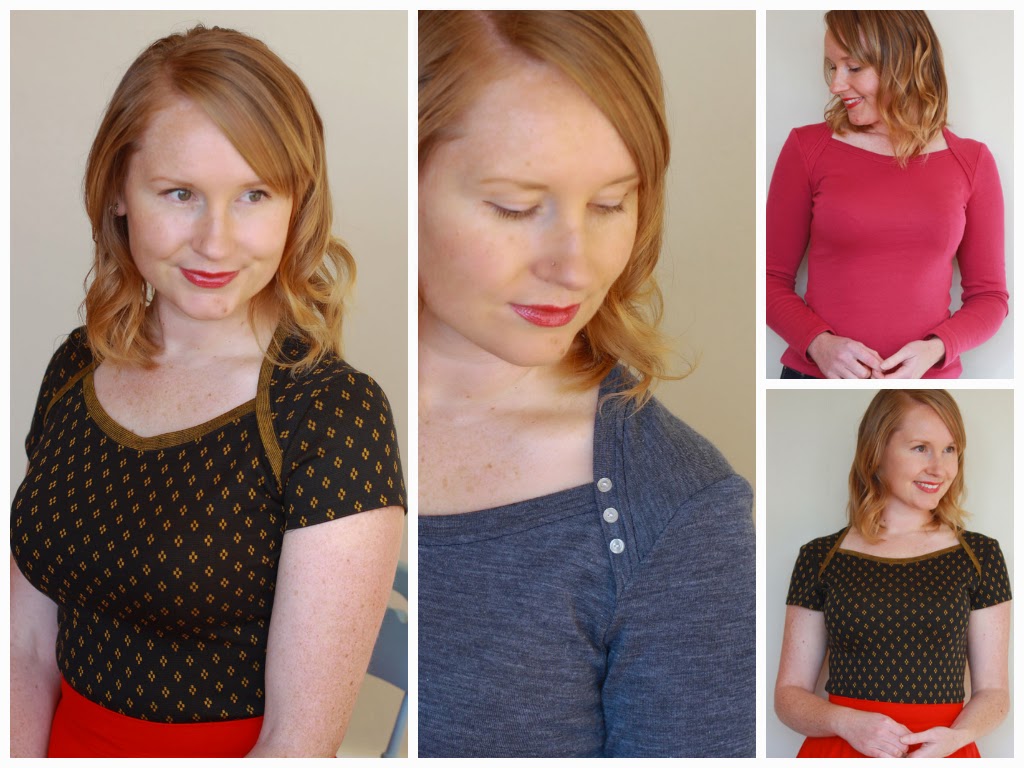 For the Bronte, I used a navy/white stripe knit that was in a mystery bundle from Fabric Mart.  I am not well versed on knits, but to me, it seems like a cotton blend double knit.  When I got this some time last year, I wasn’t real happy with it, but put it in my stash thinking it may come to good use sometime and it sure did!  I used some vintage anchor buttons that I found on etsy to make it feel more nautical.

As with my first Bronte, this one is graded up one size to a size 22.  The only thing that I did not like about this Bronte was that I think I pulled the neckline binding a bit to much and it shows.  I also must have sewn my previous Bronte in a 5/8″ seam instead of the recommended 3/8″ which I did for this one, as this one doesn’t seem to fit as snugly.  Or perhaps it’s because the ponte was heavier than this knit?  Not quite sure, but I still like it.  This one is also a little shorter than the pattern as I didn’t have enough fabric to cut the entire length.  I am still a bit of knit newbie, but I’m pretty certain that the other knit I bought to make a Bronte (a striped jersey) is too light for this pattern.  Does anyone have any recommendations for another knit top pattern that they love???

My Peggy skirt is View A with the button tabs and graded up to about a size 22.  I made it out of a lightweight denim that I found at Joann’s.  I was out of lightweight fusible interfacing as the pattern suggests and used a sew-in heavier interfacing on the waistband and tabs.  It seems to have worked alright, although it’s a bit bulkier than it would have been with the other interfacing.

Honestly… I have not put in a lapped zipper for many years.  I generally just avoid them when I see them in a pattern and sew something else.  I decided to sew it into this skirt and don’t think that I did half bad, although it should overlap a little bit more.  I used a jean zip as that is what I had.  I live 30 miles from the nearest sewing store, so I don’t exactly jump in my car to get every little thing and either stock up or make do.  The jean zip worked fine for this skirt, although I am a little worried that without fabric between me and the zip that it might hurt my skin, so I may have to add something back there to cover it.  It was fine though when I wore it with this shirt, although I have the shirt tucked in.

For the back button, I found this vintage anchor button in my grandma’s button stash.  It’s a bit worse for the wear as it was obviously used on some long gone garment, but I think it adds character!  The metal buttons on the tabs are just ones I found at Joann’s.

As you can tell, the waistband is a bit big, so I’m going to have to adjust that.  I made another Peggy right before this (soon to be blogged!) and it fitted just fine, so I figured this one would be okay.  I did not try this on until these photos…. and it looked a bit big hanging on my dressform, but as my dressform doesn’t have wobbly bits, I wasn’t worried about it, especially as I made a previous Peggy in the same manner right before this one.  So I will need to fix that, which may be remedied just by moving the back button.

The Peggy is on my list of go-to skirt patterns now.  I love the a-line and the button tabs.  They are fab!!!!  The pockets are awesome as well!  It’s also so nice to make some separates as I’m primarily a dress sewer.   It’s nice to have a little change!

I’m posing in this garden as I’ve been working on it.  It was mostly just dirt and a few struggling flowers.  Now it’s flowers and weeds! lol 🙂  I put in a whole new drip system and am going wild with flower planting.  We are currently in a desperate drought here in California. so this is pretty much the only place where I’m tending to flowers and other ornamentals.  My grandma had many flower beds on our ranch, but we are turning the other ones to seasonal and/or drought resistant plantings, so this is my place to play.  I also gave up my veggie garden this year due to the water situation, so it’s nice to have something to tend.

I am definitely a nautical fan now, even if I live 3 hours from the ocean!

« A Bright Coral Peasant Dress
And we have lift-off! The Curvy Sewing Collective launches today! »