I’m on a little bit of a small sewing hiatus at the moment as I’ve been sick, so I thought it would be a great time to reflect on my sewing from last year and focus on what I want to sew this year.

2014 was a great year for me on many levels, with the best thing that happened to me being that I was prescribed my scleral lenses and was finally able to SEE!  This helped my sewing greatly as I was no longer squinting and trying hard to see while I sewed due to my eye disability — keratoconus.  I was able to start sewing more with less concentration (and headaches) and it was like seeing everything in HD after viewing the world through a muddy, unclear filter.  This also meant that I could actually SEE myself and my appearance and you may have noticed a big difference between my photos pre-lenses and post-lenses.  I could not see before if I had a scowl on my face in photos or if I looked deranged…. It was also really difficult to take photos without my glasses and I couldn’t hardly see in the sun.  These lenses have been an absolute blessing and I feel so thankful and fortunate that I was able to get them through my specialist at UC Davis.

Alicia has mentioned how I really seem to be coming into my style and I completely agree with her.  I deliberate more on what I’m going to make and I spend a lot of time looking at fabrics.  I no longer buy fabrics that I don’t feel are good quality and I only go for a deal if it is something that is on my list of fabrics that I want to wear.  I also looked through the colors in my closet to see what was lacking and added those colors to my list.  I also try very hard not to buy fabrics I don’t need, witnessed during a recent trip to Britex in San Francisco where I abstained from buying any fabric (I was there for patterns) as the ones I wanted were seasonally inappropriate and didn’t seem right to buy right now (if they were on sale I would have been all over them though….). 🙂

Kelly recently posted some charts that graphed her sewing from last year and I thought that would be a great thing to do, especially as I’m a bit of a listmaker (and a dork…).

2014 was the year I delved into sewing with knits and never looked back.  That sure is evidenced by this chart!  Woven dresses are still tops with me, but will they be in 2015?  I guess we’ll have to see!  I only charted garments that I had blogged about and ones that I made for myself.  There were some skirts and UFOs that didn’t get included and the last two dresses I made in 2014 that have yet to be photographed.

I also branched out from my regular style last year and tried some different silhouettes.  I found that I still prefer my favorite fit and flair dresses and those are what I wear most often.  It’s good to try other things though and I plan to do more of that this year as well!

As far as patterns that I sewed with — BlueGingerDoll and Colette are my obvious favorite pattern companies.  That’s do mostly to the fact that I like the fit of their patterns and I know what to expect with their patterns.  I also love the styles that both Abby and Sarai design and there will definitely be more makes from their patterns this year.

As far as what I hope to make this year, perhaps if I tell you, maybe I will actually do it??! 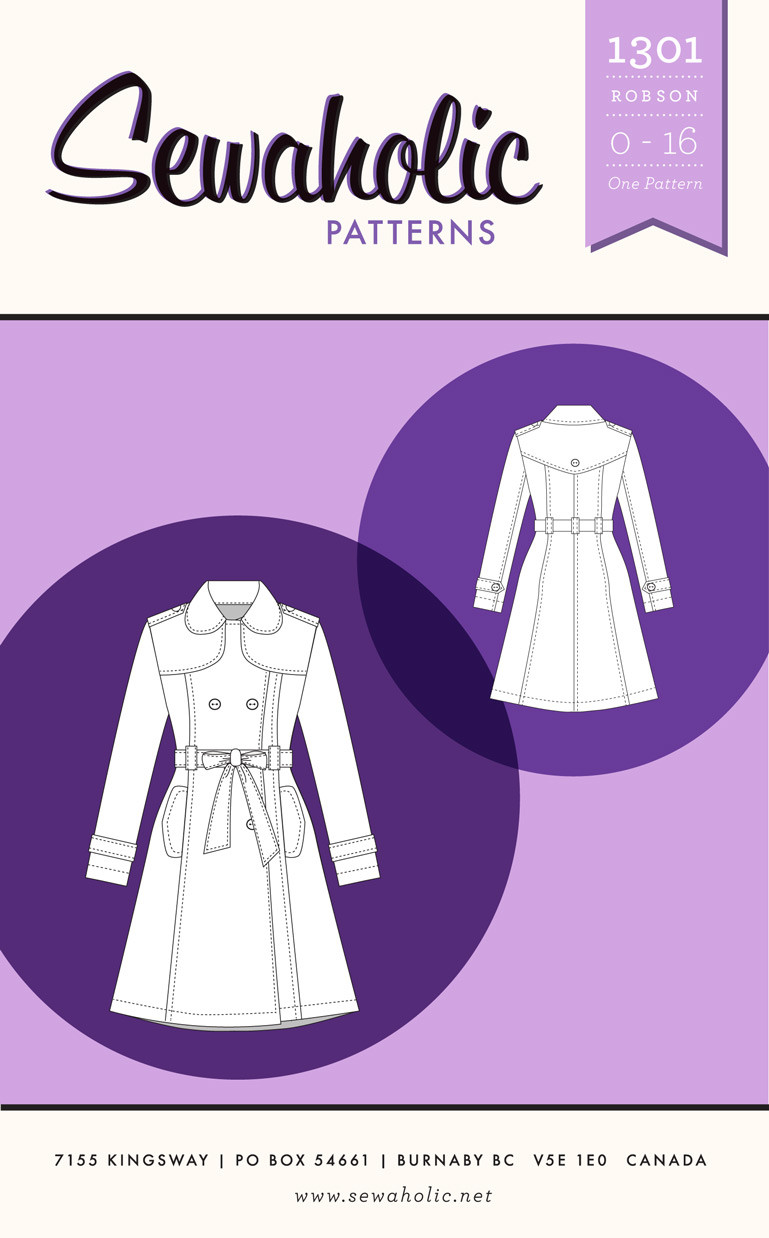 I have had this pattern and the fabrics to make it for a while now and I would really like to tackle it before it’s hot here again… I have planned to make it since last year, but obviously haven’t done it yet.  If it gets hot again before I get to it, I probably will put it off AGAIN!  Someday I will have a fuschia silk faille trench coat and hopefully it’s someday soon!

I have three wool coatings sitting in my stash waiting to be made into various coat patterns.  Will I make this before it’s no longer useful?  Who knows… this has been sitting on my sewing list for far over a year.  I’ve been reminded of this as of late as I’ve been wearing my lovely dark red Kenneth Cole wool coat that rarely gets worn out here.  I usually only get wear out of these coats whilst visiting the East Coast or the Midwest, but it has been chilly here and they do come in handy.

I have the patterns.  I have the fabrics.  I have the notions.  I took the craftsy class.  Why oh why do I not do this?  It can’t be that hard?  I mean really, I’ve made corsets — I can make a freakin’ bra!!  2015 needs to be the year I hunker down and do this instead of being perennially tempted by all of the pretty dresses.

I wear these all the time in cold weather — why don’t I make some???!!  I have a few legging patterns, but haven’t decided which to make yet.  If you’ve made leggings, what patterns do you like?

Back in the day when I was involved with politics and non-profits I wore a lot of suits.  In more recent years I didn’t wear as many when I was involved in academia and participated in forums, lectures and conferences as I could get by with “dress clothes”.  I only have one suit now (a pink tweed skirt suit from Lane Bryant back when they had some really nice clothing in 2005) and it’s a bit tight.  I would like to have a couple more suits that are more my style and have the patterns and suitings to make them.  I’m about ready to become part of an organization where I will be wearing suits and nice dresses and it would be nice to have some me-made ones.  I would also like to have the quintessential navy blazer.

Yep, I need to get off my bum and make these.  Maybe I will be held accountable now as I’ve made this list public.  Or maybe I will just ignore it another year?  What I really like to make are clothes that I wear everyday — which is what you see here on this blog.  It’s time to fulfill those vacant areas on my me-made list and DO THIS! *cue manly fist punching*

I’m working on some cool and fun projects that I’ll be sharing SOON.  And I’m looking forward to showing you those!

What are you looking forward to making this year?